The stories, families and history of Amesville, Ohio.

The origins of Amesville

Amesville long has been a village of distinction, having been settled by prominent families of New England. It is the seat of Ames Township, which originally encompassed 360 square miles. It is the only township in Ohio which was named by an act of Congress, named for Fisher Ames, a famous orator, statesman and writer. The first settlement, known as Mud Sock, was located along SR 550, near the present Amesville Cemetery, on the original Silas Dean Farm (established prior to 1796). There stood a log school built in 1804; the headmaster was Harvard graduate Moses Everett. By 1814, there also stood 4 or 5 homes, a tannery, a store, a blacksmith shop by 1828, and in 1832, a brick church.

In 1797, Ephraim Cutler made his home in Ames Township. Other families followed, including George Ewing and his son Thomas, who was in the first graduating class from Ohio University. Sylvanus Ames settled in the area around 1800; he became the second sheriff of Athens County, a trustee of Ohio University, and representative to the 16th and 17th General Assemblies. At the time, these pioneer settlers didn't realize the impact they would make on the future town of Amesville.

The Coonskin Library, the most historic of Amesville’s institutions, opened its doors on February 2, 1804. Its official name was the Western Library Association. Most people referred to it as the Coonskin Library since raccoon furs provided the money necessary to begin the library. The library's holdings grew and included several hundred books by 1830. The Ohio Historical Society now holds most of the original volumes.

The Coonskin Library was not the first library in Ohio. At least two other libraries had been founded before Ohio became a state in 1803. Israel Putnam started a small library at Belpre in 1795. In 1802, Governor Arthur St. Clair and twenty-three other Cincinnati residents established the Cincinnati Library. To check out books at all three of these libraries, users had to be subscribers. This meant that they had to provide donations for the upkeep and the expansion of the libraries. They sometimes had to pay a yearly fee as well. These charges kept many Ohioans from being able to use these libraries.

Since 1797 Amesville has grown slowly but steadily. In 1802, the first school built in Ames Township was taught by Charles Cutler. The Amesville Academy was established after the town held a meeting about better education. The first  Post Office was located in a brick building at the corner of State and Main Streets in 1821. At the time, the building was also home to a store. The United Methodist Church was formed in 1824, followed by the Amesville Presbyterian Church in 1829.

Unfortunately, the town's location on the bank of Federal Creek and by the McDougal Creek branch have made it prone to flooding. The first flood occurred in 1873. Many floods have followed, including back-to-back floods in 1997 and 1998. Each time, the community has come together to rebuild the town.

​Fisher Ames, an orator and member of Congress from Massachusetts 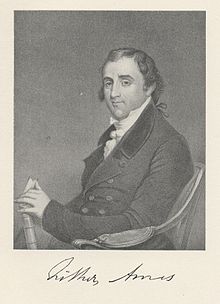